It was his birthday, he wanted a cake. She wanted to bake him a cake, his mother. But she could not make a cake because she had nothing – only a single onion and a packet of pasta. She wondered if she could bake a cake with onion and pasta, as the bombs rained down and her child cried for his cake. 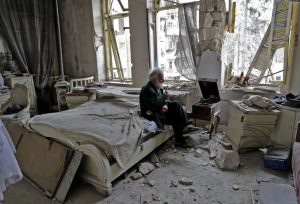 I kept calling all these people. None of them knew who I was. I asked the people I phoned to rescue the people trapped in the city but the people I spoke to just sighed. It was as if I was trying to sell them double-glazing.

When you killed the fox on the road did you think of the girl in her red boots, her leg splayed out at an impossible angle? As the bones of the fox snapped under the car wheels, what were you thinking? Were you thinking of its soul, or how the crows would come later to feast on its entrails? Did you wonder how long the girl would lie there in the street, in the broken city, dead in her red boots? Or were you thinking only of the long road home, your carelessness something you did not care about.

They were forced to leave their homes on a grey, frozen day in winter. They packed their bags, their children and their birds in cages, their hopes, dreams and memories – they picked up all these things and boarded the green buses – the buses that stole their pasts, the buses that took them away to another place where they hoped they might be safe. Yes, they hoped this and we hoped it too but none of us are certain of hope in this cruel and indifferent world.

My friend said the world was dead, that soon they would come for him too.

I tried to send him winged birds and angels, a life-raft, a ticket to freedom but all bounced back.

I tried words of comfort.

The words fell thick and sticky from my mouth, like heavy oil that pollutes the earth.

As for the angels, they have long since gone.

You are lost. Somewhere. I fear you are lost in a dark place. A cell without windows. A place of flaying and electrocution. No. Perhaps you lie deep below glassy water. Or in the entrails of a building. Where the roof is fallen. No. I think you hide in the orchard under the cherry blossoms, the grass staining your shirt. But wherever you are, you flow on like an endless stream.

In Sweden she wears a white hijab and stares at the birch trees. At sunset they form a dark waterfall against the golden sky. Tonight there is a crescent moon and the child is crying again. Tomorrow she will study the new language and pack her hopes into the suitcase that lies in the wardrobe. She will buy aubergines, lemons and garlic. She will throw out the old bread for the jackdaws who pick their way across the grass. One day perhaps she will go home. This is what she says to herself as the child cries and the lamps come on, one by one.

We watch a video of their old house in Syria. Blue skies. Fat white blossom. A David Hockney pool. A gazebo covered in jasmine. Their house is large with sweet green hedges, the hall big enough to hold a wedding party. They show me this in their small, dustless apartment. When the video is over, she sighs. She switches on the television to a Lebanese talk-show, and brings us hot, sweet coffee, baklavas. Her hair is faded. Her husband sits on the edge of the sofa with his crutches. She smiles as we eat and sip our coffee. Her smile is like her sigh, sad and lovely. An exile’s smile.