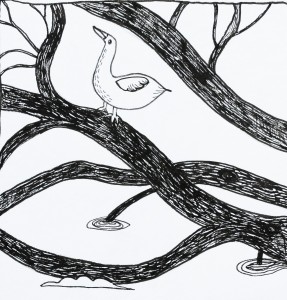 The postman brings a parcel. But it is not for me: it’s for my son. Some computer part, I think. I wasn’t expecting a parcel but all the same, I feel bad that it’s not mine. I would have liked a surprise. Things have been so predictable lately.

“I’ve been ill,” the postman says.

“I’m sorry to hear that.” It’s taken me five years to get on chatting terms with the postman and I still don’t know his name. Now I notice his hair has thinned and his left eye has turned lopsided, giving him a slightly mournful look.

“I’m fine,” I say though my voice sounds like a frog being strangled, “But I may be coming down with a sore throat.”

Soon after the postman has gone, there is a second knock. When I open the door, it creaks loudly. Standing on the step is a smart-suited man, with a smile like a gash in a tin can.

I know what’s coming but I can’t move.

“Our company has an exceptional offer this month on double-glazing. 40% off.”

He doesn’t budge. He continues to stand on my doorstep in his dark suit, with his tin can smile. I smile and blow him a kiss. That gets rid of him pretty darned quick.

Once he’s gone, I walk the dog. Some mornings I hide from the other dog walkers. Other times I gabble; tell them my life story. BIG mistake. This is England. People don’t want to know. When I’ve gone and said more than I ought, I see the pulling back, the knitted smile, the dog straining on its lead.

Today the man with the crazy dog stays chatting for longer than usual. I don’t mention my woes. The man is wearing his work-clothes: paint-splattered overalls. He is small for a man and I’m tall for a woman. I have to look down when I talk to him and it feels strange. But when I think about that, I decide that even though I mostly pick tall men for my long-term lovers, I feel more comfortable with the smaller ones.

“Has he calmed down?” I ask, looking at the dog. The dog has already put his huge, muddy paws on my trousers. Luckily, they are my oldest pair with cigarette holes burnt into the thigh.

“He’s still mad as a hatter,” the man says, “Even though he’s been done.” I know the dog’s name, Harry, but I don’t know the man’s name. “He’s young. Give him time.” But when I’ve said this I doubt the truth of it.

“How’s that new job of yours going?” the man asks. Of course he knows about my job problems. Everyone does.

I pull a face. “I have to see the boss this afternoon.”

“Are you in trouble?” His dog lifts one leg and stains the nearest tree trunk.

“I work for myself,” he says. “Best way. Except when it comes to the tax forms.”

“I’ve got an appraisal” I say.

“They measure you up; you’re always found wanting.”

I’m terrified of bosses, whatever shape or package they come in: round or svelte, blonde or grey, bald or with princess hair. My mind turns them into monsters. It’s as though I have some kind of reverse spell system in my brain. (Lovers go the other way. They turn from the frogs they are into princes).

Val, who works in my same office, says, “You’ve got to think of your boss in some ridiculous situation, running through a car park dressed as a little green elf, skittling down the road in a pink tutu, which shows off her hairy legs.”

“You can,” Val says. She knows these things.

I sigh and slop my coffee on the desk. Then I say. “The moment their faces gaze at me I see Pol Pot, Stalin. I see a Hitler moustache instead of faint downy hairs. I see a whip in their hand instead of a pen. Then bang! It’s like a bad fairy story. I feel I’ve turned really small like Alice when she swallowed that stuff.”

Val gives me a stern look.

“I know what you’re thinking,” I say. “Alice didn’t stay small. She grew big after that. Or was it the other way round?”

I throw my hands up.

On my way to the appraisal I am in such a state of agitation that I don’t check properly at the T- junction. There is a blur of white and a sudden bang. For a moment I have no idea what has happened. Then it dawns on me: I have driven out into the path of a white van.

I am not hurt but the side the car is bashed in and the door won’t open. I get out of the passenger door, somewhat hysterical. The driver moves my car off the road. He asks if he can call someone for me.

“I’m fine,” I say, though I’m gasping for air as if drowning.

“I was supposed to meet my boss.”

“Well you’re not going anywhere now,” he says. “Here. Let me call your insurance company for you and we’ll get you sorted.” And he does.

Meanwhile I call the boss. She’s as nice as pie. “Are you all right?” she asks and it sounds as though she means it.

“We’ll re-schedule. It’s no problem. Where are you anyway?”

I explain. We re-schedule. Ten minutes later the boss arrives in her car with a flask of sweet tea and a home-made biscuit. She says she’ll run me home if I can’t drive. I’m shaking all over. I keep wondering why I think she’s Stalin’s stand-in. She doesn’t even look like him. She looks like someone’s favourite aunt.

“How was your meeting?” the man in the paint-splattered overalls asks. His dog is nowhere to be seen.

I explain it all; the car, the van, the flask of tea.

“Your boss sounds nice,” he says. “I thought she must be some sort of ogre.”

“I see,” he says although he obviously doesn’t.

“He’s in the bushes somewhere. He won’t be told.”

I think about the dog later on. I’d like to be roaming the bushes; no one to boss me around. As far as I’m concerned, bosses are all the same, even the nice ones. I realise it’s not their fault but that’s just the way it is.

I could have a boss who bakes me cakes and cleans my house, a boss who gives me pay rises and never asks me to do extra work and I’d still be terrified. Or a boss who says lots of nice things about me and asks my opinion. But I’d know it was all a lie.

But probably I wouldn’t want to be a dog. Dogs get bossed around something chronic. They’re always being told to sit, or stand up and beg. When my dog runs over the road without me telling her, I shout. “Tovey! You stupid dog. I told you to stay!”

Then she does as she’s told and her eyes go all silly. Sometimes she rolls over on her stomach submissively. I hate it when she does that. I want to hit her. Sometimes if she thinks I’m not watching her, she will do something on the sly. She’ll poke her nose into the compost bin, which we keep in the kitchen and I’ll come in to find potato peelings all over the floor. Or she’ll sneak down in the night and sleep on the sofa instead of her box. There’s no tail-in-the-air-I’ll-do-as-I-please about her. She’s too timid for that. I think we have similar personalities. Even her nose looks like mine.

I’d be better off as a cat; that’s what I think. Cats do as they please. Their owners have no control over them whatsoever. If a cat wants to kill a bird, so be it. If its owner is a bird-lover, well that’s just tough. A cat will walk out the moment it wants to. Or climb a tree. Or sleep all day.

“Would you rather be a cat or a dog?” I ask Val when I’m next in the office.

“A cat,” she says without hesitation.

“Because they’re so independent.”

She gives me a funny look. “Is this some sort of test?”

She hesitates. “A dog,” she says, “A small one, perhaps a terrier.” She peers at me over the top of her glasses. “Yes. A terrier. Definitely.”

“I thought you’d say that,” I say and I stare out of the office window. Above the roofs, the clouds are moving fast. We haven’t seen clouds in weeks. High up a couple of swifts are diving for insects.

“Maybe I’ll come back as a bird. I think I’d like that best of all.”

“What sort of bird?”

“A swift. They are always on the wing. And they travel so.”

“Sometimes I dream I am flying,” I say.

“You can be anything in dreams.” She turns back to her work.

I stay at the window for a long time, listening to the summer breeze and the screaming of the swifts and Val tip-tapping on the keyboard.

9 thoughts on “Free as a Bird”