This flash was originally published in Flash Flood, June 2019

Georgios owns a black dog. Every day at seven, morning and afternoon, his dog races along the shingle and barks at the stones.

Georgios helps dock the ferries. The first ferry brings a weeping woman, the milk lorry, a large man with a cross tattooed on his bare skull and Stavros, the tired taxi-driver. Stavros is always on the first ferry. Except Sundays. 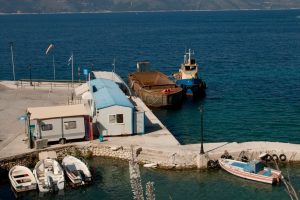 At eleven Georgios drinks a strong coffee. A seagull circles the sky. The sea sparkles like a thousand tiny fish. He wonders if one day he might leave this island.

The third ferry spews out a couple in the middle of a furious row. The woman has yellow hair and wears a dress the colour of the sea. The man has a red face, a thin nose. Georgios cannot understand the words the couple throw into the air but he understands fireworks.

At seven the dog races down the shingle and barks at the stones. Georgios sighs and walks to his caravan. This is where he lives. Day in and day out. Whatever the weather.

There is a woman frying onions in his caravan. She has on a blue headscarf, a long print skirt. ‘I came on the six o’clock ferry,’ she says. Her voice is sweet like a siren’s.

Georgios opens his mouth. He is a fish floundering on the quayside.

‘Fetch me the meat from the fridge, will you?’

And this he does.

The woman stays. Each day Georgios stands on the quayside waving his baton. Each day the sun rises and falls and the dog races along the shingle. Sometimes the island gives a small shudder, like the ferry as it docks, but otherwise life goes on, quiet and steady.