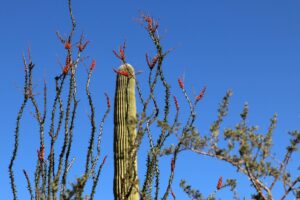 60 is a yellow school bus, at 59 the shadows grow long and the sun falls from the sky and 58 is the border patrol. 54 is WHY – can there be such a place – and junction 86, gas, food and lodging and a Texaco garage. 53 is the Coyote Howls West RV Park. At 52 a notice states that to litter the highway is unlawful. There are birds at 51 and telegraph poles at 50 through to 45, and cinder cones, a huge copper mine, tin cans, a flash flood area. The road is long and straight and there are no clouds, the sky is a pale washed blue, the grass gold and dry on the broken verge.

At 45 the surface of the road is skiddy and the walls of the mine tailings are dark and high. At 44 bumps and a speed limit. At 43 Belly Acres, truck crossing, a view of the white church, the low sun dazzling our eyes. 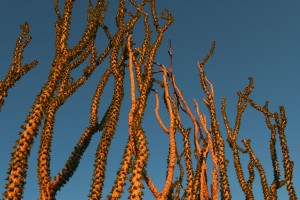 This desert is a thousand plants, a million stones, a hawk on the wing, a lizard under a stone, a running hare, a hidden snake, an ever-changing sky, blue shadows on the mountains, the small red flower on the cactus, the smell after rain, a wash, an arroyo, a creek, a row of cottonwoods, a palm grove, the singing of a dove, the croak of a raven, the sound of a bird’s wing, the brilliance of burnished green on the throat of a humming bird, a lone fly, a distant aeroplane, a night glittering with stars.

A small desert breeze shakes the smoke trees, the old willows, down in the wash.

In the palm grove there is no sound but the rustle of dry skirts and my feet sinking into the damp sand.

All day rainbows play across the desert floor like angels.

A humming bird is such a small thing. But so fast. Your eye alights on it and it is gone.

The day begins a slow, still yellow as the desert dove dallies on the wire. The blue mountains catch the first red fire, then turn a speckled pink, like the broken skin of a painted egg. My footsteps stumble out across the crunching stones, breaking the silence and a car traverses the high road. The sun up now. Already colours are leaching out of the landscape, which becomes biscuit, rock and blue sky.

The picnic site is pockmarked with drifts of snow and a Chinese family is having a snowball fight. After they have gone I hear the wind in the pine trees like shingle on a distant shoreline. There are oaks here too, stunted, twisted specimens without leaves.  An elk steps out of the shadows, then vanishes again, silently, as if it never existed, as if I merely imagined its presence. Where the elk has gone I can see the red of the canyon walls. Now two small birds, similar to the sparrows I see back home, fly down onto a patch of exposed earth. They are grey in colour with a soft, gleaming back of russet, like the colour of a pine cone in the late afternoon sun. The pair come close, peck the ground where the snow is gone. There are tracks everywhere in this snow. Mammals. Birds. Boots. Trainers. The wind blows up and it grows cold and it is as if the sea were really coming in, the tide rising suddenly.