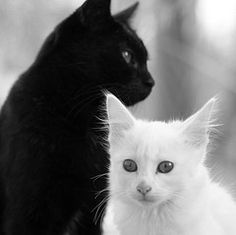 The President has banned black cats from the city. ‘These cats bring us bad luck,’ he has decreed. ‘Anyone found keeping a black cat from henceforth will face immediate imprisonment.’

Everyone knows that the dungeons below the President’s palace are as black as night, blacker than the fur of a panther. Not a single shaft of light pierces the cold and the damp. And the cries that emanate from that terrible place are like the howls of cats. After all, in this city, who knows what happens to the people who vanish from the streets between dawn and dusk, in the hours when the bells toll?

Seven days after the decree was announced, an old babushka from the city had the audacity to write to the editor of the national newspaper. In the letter, which I will not print in full here, she asked, ‘Does the decree allow me to bleach my cat’s fur white?’ People were shocked. Many thought she was crazy. Because no one criticises the President. No one.

The editor of the paper did not respond to the babushka directly. Instead he wrote an article titled ‘When is a cat white?’

‘Our blessed President has done a wonderful thing for our city. The black cat is not like other cats. Not only does the black cat bring bad luck, but also it cannot be trusted. Readers – only last week a black cat jumped in through an open window and tore the limbs off a new-born and today this newspaper has received news of yet another attack, this time on a young woman. What will tomorrow bring?’ The editor concluded with: ‘Bleaching a cat is against the law. Bleaching may change the colour of its fur but it can never transform its evil, black heart.’

All the newspapers’ readers agreed. They were angry with the old woman for suggesting such a thing and demanded punishment.

The President soon ordered soldiers to the babushka’s apartment. His soldiers found the old woman sitting on a red armchair knitting a white coat. It was a small coat such as something a grandmother would knit for her grandchild.

‘Where is the black cat?’ the officer in charge demanded. He was wearing shiny black boots and carried a large black gun.

The babushka smiled. ‘I have no black cat. May I offer you tea while you are here? Black or white?’

The officer’s face grew dark as a thundercloud. Perhaps it even grew dark like the fur that lined his winter hat. ‘I do not tolerate impudence,’ he spat. ‘Where is your cat?’

The babushka rose slowly to her feet, leaving her knitting on the chair. ‘Dear sir, my cat is all colours of the rainbow. And he is outside, sir.’ She plucked at the officer’s sleeve. ‘If you would be so kind as to look out of my window perhaps you will see him below, stalking the birds.’

The officer peered down. He could see nothing but the snow falling, the winter trees dark against the pale sky. He turned back to the old woman. ‘If we discover you have been lying, you will pay a high price. Do not think your age will save you.’

‘Of course,’ the babushka said, crossing herself. ‘I understand the President’s decree. He must be obeyed by all means.’

The officer glowered at the old woman. The old woman smiled and bowed her head.

‘Attention! Attention!’ The officer growled at his men. The soldiers stood tall and clicked their boots. No one said goodbye.

The babushka listened to the soldiers tramping down the concrete stairs.

When she could no longer hear the sound of their boots, she sat down on her chair and picked up her knitting again, and all across the city the black cats, dressed in their knitted white coats, padded through the snow unseen.

(Thanks to Julia for the idea)