A cock crowed. Six dogs broke the sky with their barking. Outside the barred window a lime dropped softly onto the concrete. 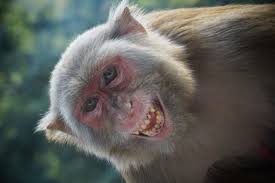 Her footsteps pattered across the broken floor. A full moon shone high up, still silver in the pale dawn. Its light fell on the wrapped form of her mother on the day-bed. Everyone was sleeping. A clock ticked. Someone in the next house turned on the radio. Two blocks away a truck thundered down the Pan-America.

She picked up the grey plastic sack that contained all her belongings. She was searching for something special, the book the Australian had given her. The book was called, El Mono Rieno, the laughing monkey. It was the only book she owned. She dug deep in the sack. Another dog barked. A horn blared.

In a minute the fat girl upstairs would be awake, the family calling for her mother, “Sylvia! Sylvia!” In a minute her mother would open her eyes and say, “Vestirse! Hurry, hurry!”

There were dishes to be cleaned, a mouth of teeth.

She laid the book carefully on the dining room table. The monkey stared out at her, baring its white teeth. She could not read the words. But she knew the story. The monkey hung from the tree by its tail and laughed. It ate a banana and another and another… uno, dos, tres…

The sky turned the colour of a cheap blue bead. Pale yellow clouds like old sheep drifted. She turned another page. Someone stirred upstairs.

“Sisa, there’s no time for that now. Muevete!” Her mother frowned and slipped on a shapeless grey sweatshirt.

“I’m moving, Mama.” She closed the pages of the book, picked out the cups and plates from the heavy sideboard and laid them on the table. Then she set down the sugar bowl, the packet of tea in its red box and the cheap coffee in readiness for the guests. There were always guests in the house.

Her mother fled to the bakery. She would not be long. Outside, red petals glued themselves to the rough pavements and an empty whisky bottle sighed in the breeze.

It was dark in the house. No one was at home. Her mother had switched on the television set before leaving but it was of no comfort. Dogs squealed and howled. A baby cried. On the television, puppets laughed. They were not funny like the monkey and she could not laugh with them.

When she heard the key turn in the lock she tried to guess who it might be. She sat up and drew her knees close to her chest and listened. The door opened and closed with a click and light spilled in from the kitchen. She could hear the panting of the dog outside and the faint scrape of a chair.

The puppets had vanished. On the screen a man with short hair was kissing a blonde woman. She remembered something, maybe it was her mother kissing her father but she couldn’t be quite sure.

She wished the guest would come out of the kitchen, and show herself. The volunteer shouldn’t be in the kitchen unless she was just fetching a glass of water. The mistress of the house had said so. She listened but there was no gurgling sound. The chair scraped again and she heard a heavy footstep like the Australian’s and for a moment she was confused, thinking the Australian had returned and then she thought she might cry and she wanted her mother and she was lonely and afraid but she continued to sit in the dark with the television and wait.

A grey light filtered through the window. She opened her eyes and reached for her mother but her child’s hand came into contact with nothing and she remembered that her mother had gone to visit relatives in the mountains; that she would not be back until the afternoon.

She blinked and stretched and pulled the thin blanket around her body. The mornings were always cold. Later the sun would come out, at least for a while, and there would be no need for covers.

The book about the laughing monkey lay next to the day-bed on the tiled floor. She picked it up. The pages were ripped. Someone had crossed out the monkey’s face with felt pen. She knew who. She blinked away the tears and wiped her nose. Maybe the new English guest would buy her a new book.

“Sisa! Sisa!” It was the fat girl calling.

She got up, dropped the book into the waste bin and ran upstairs. She would not mention it to anyone and she would never forget. But one day, maybe one day soon, the fat girl would have cause to remember.