The ‘Brexit’ story, written in 2019, unpublished

We’ve had enough. We’ll miss our Master and the blood-soaked biscuits he throws but we simply can’t bear the idea of staying anymore. London is miserable. Grey and cold. Divided. Unhappy. Polluted. It stinks too. We’re off in search of better climes. 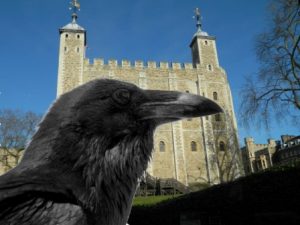 There are seven of us – Harris, Gripp, Rocky, Erin, Poppy, Merlina and me – Jubilee. Harris has been dragging his feet but we have finally persuaded him to fly with us. The kingdom is already lost, I said. Your staying will make no difference.

Harris said we’d not get far because our wings have been clipped. Poppy reminded us that the Master has reduced the clipping. In any case, she added, surely you remember Grog who escaped to the Rose and Crown.

Not the Rose and Crown – the Rose and Punchbowl – and that was way back in 1981 before all this current trouble.

There was enough trouble in 1981, Erin said.

Someone got married too.

I know, Harris said. To be honest I don’t recall Grog. The name fits though. Grog. Probably died of liver failure.

What about George? He got in trouble for eating TV aerials, Rocky said. He lost his job.

There’s no point concerning ourselves with the past now.

You can’t escape the past, Jubilee, not with a name like that. 1977. Punk rock. That Jubilee.

Yeah, yeah. What matters now is that we go. If the Kingdom falls, we can’t be blamed. It’s their fault – the humans. They bicker worse than the magpies.

All right. We’re off.

Now. Before they elect a new leader.