No More Than An Eggshell – First published by Flashback Fiction, November 2019

I pin up my sheets and see how tomorrow the weather will turn. Autumn is almost gone. Winter is soon to be upon us. The dock plants lie shrivelled and black, the marsh-grass salt-flattened; the air chill as Sunday church. 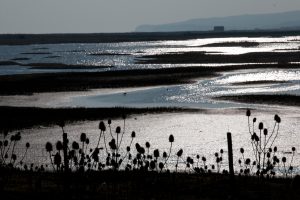 After my many chores are completed, I stroll down the path to the shore. The gulls float on a river of wind and the bed sheets flap on the line like restless sails on the horizon. The wind has increased in strength since the morning. It tosses the clouds eastwards, towards the edges.

Once a proud town stood on what is now river and sea – a town chattering with traders and the clatter of horses, a town of inns; a magnificent stone church. Folk claim to have heard the buried clang of the bells on stormy nights. It is seven centuries since the town vanished, taken by storm and tidal surge. We are safe here, in our little village, settled some way from the sea. Yet, as I step onto the shingle a wave as high as any I have witnessed in these parts strikes the shore and thunders up the high bank. I retreat in haste and am left with wet shoes and the most singular trembling.

In the evening I forget the earlier unsettling. We sit quiet by the fire. He roasts chestnuts and I take out my mending. There are socks to darn, a torn shirt that needs attention. Later a kiss, sweet as our first. We are not married long.

I wake early in thick darkness to a wind crashing over the rooftops, a wind howling like our neighbour’s dog after he was run over by a cart last year. I hear the fire of the maroons and my husband sits up in bed and says he must go and all I say is to take care as fear swells in me like the storm itself.

He lies quiet on the shoreline, his un-moving eye a stillness in the storm’s deep roar, the sea still clinging to him. Can it be only last night we were sat at the fire, roasting chestnuts? He will eat nothing now.

Edge of town, near the sandy beach that stretches for miles. Here, in an area of wasteland frequented by alcoholics, wastrels, drug addicts, homeless people, rats and stray cats, stands an old door, propped up against bricks. A white door, almost-new door, what-is-it-doing here door.

Not a door, Tom says, a portal. To another world.

Eric laughs. Are you tripping, man?

Tom has a gift with the spray can. Artistic, his mum says. Teachers say he’s easily distracted. Not a bad boy at heart. But needs to focus.

Nothing but litter the other side of that door, Eric says. Used needles and condoms. A black thong. Winter wonderland, my arse. Someone will burn that soon. Bonfire night coming up.

Door’s still there. A hole kicked through it. N…IA.

Tom’s on a two-week exclusion. Insubordination. Eric excluded permanently. Setting off a firework during assembly.

Today a cold wind barrels in off the North Sea. Eric and Tom are sitting on an armchair close to the door. Smoking weed. Waiting.

What’s for us in this dump? Eric says. We gotta go to London.

Snowstorm. Eric at his uncle’s place watching snooker, drinking beer. No sign of Tom. Eric’s been calling since last night. No response. Fuck you, Tom. Go your own way.

Tom is perched on the armchair. Edge of town, close to the beach. The wasteland has turned white, the edges of things gone blurry. Even the used condoms look pretty. But it’s fucking freezing. He can hardly feel his feet.

Why don’t you step through that door, Tom? What are you afraid of? The Snow Queen and her evil heart? Got no guts?

Who is whispering in his ear? The wind, the snowflakes?

Only ten steps and he’s through. On the other side the sun is shining. Everything is white and beautiful. Dazzling. Perfect.