This city of campaniles, calles, campos and cats, this city of pontes and palaces is sinking under its own weight of stone. While it sinks slowly into the mud of the lagoon its towers creak and shift and lean at odd angles so that at times I feel a little seasick. The Adriatic itself is expanding, its tides reaching ever higher, depositing fish in the Piazza San Marco, its waters soaking the feet of residents and tourists alike. How much time does it have left, this city, which somehow should not exist; this city that in a distant late evening light looks like a strange, encrusted shell? Everything about it is solid, its stones and stucco, its churches and bridges, and yet it appears no more substantial than a mirage in a desert, or a trail of smoke from a camp-fire. 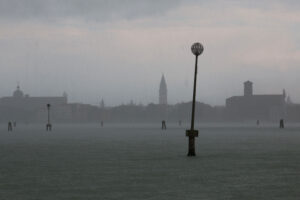 This muddle of roofs, domes, cupolas, unsteady towers, of pigeons, boats and tourists, these Gothic and Moorish windows, these grilles, squares, calles, fountains and cats. All this is Venice, an upside down city where fish swim in the Piazza San Marco when the tides are high, where stone lions roar the silence. This is a city of gondolas, striped poles, crumbling masonry and empty buildings. A city of echoing footsteps, the cool wind blowing across the lagoon, a city listing, sinking and drowning in centuries of flotsam and jetsam, a city of bars and tabacchi, of gondolas and pride, its faded glory like some dowager’s dusty, bejewelled dress. Yes, this is Venice. 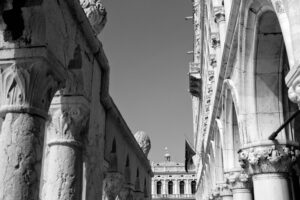 In Salizade S.Francesco there’s a fruit shop selling melons and cherries, clementines and peaches, peas and beans. Above the shop (it’s at 3144) a large plastic ladybird flies out of a window box. At 3169 – a Spiderman, a flying pigeon and eight plastic footballs in a net and an old man is walking past with sticks and he has blue eyes and seems to be talking to himself, his mouth is moving and how slow he goes. I’m eating spinach rolls in the bar and drinking something pink which soon turns my head giddy. The sun goes behind the clouds and the ice clinks in the glass, bravissimo. Another old man passes by. This one is dressed in beige, his eyes are down, he walks a little faster but the young woman with a red phone pressed to her ear is fast, sunglasses shade her eyes, ciao, ciao.