The woman cannot contain her shoe. She shakes it off and frowns. Her shoe is flat-heeled, patent leather and black, its trim gold like the early morning sun. She passes the smoking young men, who stand hunched as if afraid of the city; these men who wear old leather jackets and chequered scarves. None of them are tall; they talk together as the woman in the shiny shoes passes by, as the sun climbs in the sky and the shadows move across the square. 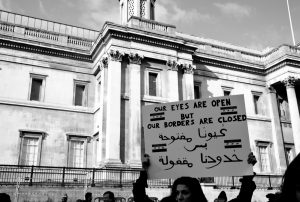 There are people on the streets early morning young men with the last hope in their eyes and a cigarette between their fingers. They gather in groups on the low wall outside the gallery listening to the traffic and watching the moving shadows.

The city gathers the people of the lost under its bridges, behind the darkness of buildings and in the places I cannot see. It gathers them at night in its cold, dark cloak and spits them out onto its squares, its pavements and stations for us to hurry by.

The city is a single magpie, an old church with a clock. Red cranes high in the sky, twenty brick chimney pots, nine satellite dishes, the struts of a railway bridge, the new built on the remains of the old.

Someone left their umbrella on the train, a lovely umbrella, soft and black, with a wooden handle. I considered taking it because of its beauty but then I remembered I never use an umbrella out of stubbornness for rain and so I left it there, in all its soft blackness.

I know my way – under the railway bridge, past the building where they used to hold the music gigs, past the mobile phone shop where old chargers lie like black snakes, past the school and the National Grid building and the shop that sells cheap clothes. Past the two old men arguing in Arabic, the girls on bikes, the girls with curls and braids, past the beggar and the man talking to himself, past the noise of the traffic, past the café with its croissants and coffee, past the smell of marijuana and into the oasis of calm where leaves drop silently and a door closes against the falling light.