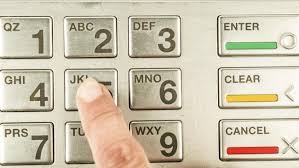 This flash was a runner-up in the 2017 WOW competition

Mrs. Hart’s PIN number might have been her son’s birthdate or something else altogether but, whatever it was, the number had now flown out of her head as if it had never existed.

The woman behind the counter frowned. ‘Try again.’

Mrs. Hart got distracted by the woman’s frown and the thick black gloves for sale next to the chocolate bars. But she did try again. Of course she did.

‘You have one more chance before the bank refuses your card.’

The woman’s frown reminded Mrs. Hart of her old teacher at primary school. What was her name? She should not allow herself to get distracted. She must think of the PIN. Her hands started to shake. If it wasn’t Jake’s birthday, perhaps it might be Amanda’s. No. Wrong. Incorrect. Error. Blunder. A right cock-up, her husband used to say.

The woman sighed loudly. ‘Don’t you have another card…or cash?’

Mrs. Hart rummaged in her purse for another card but she could only find a store discount card and one of those cards where you get a free cup of coffee after you’ve drank ten cups, plus a dog tag that had belonged to her dog Flora who died last December – the 16th of December to be precise – at 2.22pm. Her memory couldn’t be so bad if she had remembered that detail. She’s never been good with numbers. Not like some people.

Her purse contained a scruffy ten pound note and a handful of change but it wasn’t enough as she’d put £20 of petrol in the car. She wondered what would happen. Perhaps the woman would call the police and they’d lock her in the cell for the night. Perhaps her photograph would appear in the local paper.

‘Wait a moment. Let me serve these other customers.’

Mrs. Hart waited. She could feel the other customers’ eyes boring into her back. She was shaking inside as if she’d fallen into a washing machine. While she waited a memory surfaced; a day in primary school when she’d slapped Eva Cound across the face. It was wrong to slap Eva but Eva had called Mrs. Hart names – although of course she wasn’t Mrs. Hart back then but Jane Muir. Elaine had said, ‘your mother is a bad woman.’ Mrs. Hart never understood why Elaine had said such an awful thing.

Mrs. Hart pushed her thoughts aside. She looked out through the window. Outside the sky was a lovely dark blue and the streetlights had come on. ‘I don’t know why I forgot the number,’ she said to the woman. The queue had now vanished.

‘You’ll have to call the bank.’ The woman had a big red face and round glasses.

‘I don’t have one of those phones.’

‘You can use mine,’ a man said, holding out one of those new-fangled phones. He was dressed in a shiny black leather jacket dotted with silver studs. The skin on his face was tattooed with a spider’s web. He looked fearsome but he had a kind voice.

Mrs. Hart felt herself flush. ‘I’m afraid I don’t know how to use that.’

‘She forgot her PIN number,’ the woman behind the counter piped up. ‘She needs to call her bank. She owes money for petrol.’ The woman sighed. ‘Those banks take so long to answer. Bloody banks.’

Mrs. Hart smiled hearing the woman swear. The man smiled too. ‘How much do you owe?’

‘It’s £20 and a penny,’ the woman said. ‘It’s annoying that isn’t it, how it always goes to that extra penny no matter how careful you are.’

‘Yes,’ the man said, digging into his jacket pocket. ‘Always that extra penny.’ He drew out a £10 note. The note was crinkled and worn, as if it had gone through several washing cycles.

Mrs. Hart stared at the note. She wavered between the temptation to snatch it out of his hand and the other part of her which demanded she refuse his help.

‘Really?’ Mrs. Hart thought this was an odd thing to say. ‘It’s very kind of you. I appreciate this.’ She held out her shaking hand and he pressed the note into her palm.

‘Think nothing of it.’ The man paid for his fuel and walked out onto the forecourt.

‘I feel so foolish. He got me out of a tight spot. Have you seen him before?’

Mrs. Hart shook her head. At that moment the sound of motorbike engine made her turn her head. The woman looked out too. They watched as the man drove slowly across the forecourt. At the junction with the road, the bike came to a halt. Mrs. Hart assumed he was waiting for a gap in the rush-hour traffic. But no. He wasn’t waiting for that; he was waiting for something else altogether. Like a fern unfolding in time-lapse, two white wings sprouted out of his jacket. They grew quite large. They looked like swan’s wings. Then, still astride the bike, the man lifted up into the dark blue sky and was gone.

‘Well I never,’ Mrs. Hart said, blinking and rubbing her eyes. ‘Did I imagine that or…?’

The woman behind the counter said nothing. She stood there at the till, her mouth wide open, by the thick gloves and the bars of chocolate.