CAR PARKS
She likes the anonymity of car parks; the fluttering falling of starlings and the tiny clipped trees. The roar of the traffic on the motorway is a long, slow river.
She is on the way to somewhere. It does not matter where. What matters is that she is moving. However she is not moving right now but looking at the starlings and the clipped trees. 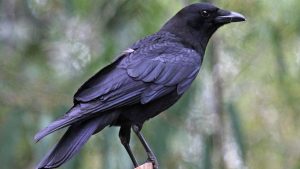 CROW
All day the crow sits on the telegraph pole and waits. He is not sure what he is waiting for. He surveys the island, its trees, cats and goats. He peers at the fishing smacks and cleans his feathers. He watches for worms, voles, breadcrumbs, chips and entrails. Sometimes he clears his throat and croaks. A dog barks. He does not like dogs. He waits. There is always something to wait for.

EYEBROWS
Boyfriend says I have perfect eyebrows. When I was a kid I counted raindrops on the window and the times my mother said, ‘huh!’ Now I count the hairs on my right eyebrow: one hundred exactly. I pluck every week to keep the number even. Boyfriend says I’m obsessive. ‘You’re obsessive about football’. That shuts him. The counting takes an age. Sometimes I have to start over. Last night I fell asleep in front of the TV. When I woke up one eyebrow was gone; shaved. It felt OK, came as quite a relief. No more counting. I laughed.

LIGHTNING
The lime green coat with piping. She loves the way the coat shines, the contrast of greens, the acid of the lime against the pine-coloured braids.
Grit under her feet mixed with mud. The wind screaming, leaves scattering her face, hair tearing. A puddle. Clouds reflected, dizzy, the silvery light and her face, blurred. Not hard-edged and glass cold, a mirror to talk back like the boys on the street.
Who’s got an ugly mug? Boyfriend didn’t like you, eh?
She touches the scarred skin. Tree roots and lightning, brilliant. In the puddle she is a princess.

THREE GEESE
The old man stared up at the cold blue sky. He held a ragged dog on a string. A kite fallen to earth. Behind the metal railing a Porsche waited on the pot-holed road. Its headlights glinted in the pale February sun. Its wheels gleamed. Its colour was red.
‘What a lovely day,’ I said.
‘Indeed,’ man said with a toothless grin.
Three geese flew overhead, honking.
‘I wish I could fly,’ I said. Because I did.
‘In that you might.’
We left each other, he and I, to the Porsche and the now empty sky.