There was a moth on her doorstep, its wings a fan of brown and cream. 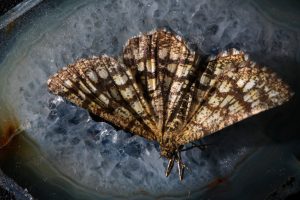 ‘Why do you need to work?’ her mother snapped as she stepped out of the apartment. ‘Do you really think you’ve become an Amerikan?’

Shirin considered her mother’s words as she walked. Deep shadows cut across the street. Cab horns blared and the man at the Greek store on the corner smiled. The sky overhead floated blissful and blue.  What did it mean to be an American anyway?

‘You’ll be wearing the stars and stripes next,’ her mother had said. Wasn’t thirty years enough to become part of this country?

At the intersection someone shouted, ‘Careful where you’re going!’ and Shirin jumped, remembering her dream of buildings crashing into dust and the silence after, while the moth fell through the night onto their doorstep, its wings crushed and broken.

She looked at her watch. How had she managed to run so late? She hurried, and her heels clacked on the side-walk and her breath came out in little bursts like gunshot.

In the dream she had seen a face at the window but it was no one she knew and when she looked again the face had gone and she was not certain if she had seen it at all. Later she dreamed she was in a library. Flames were eating at the books. She tried to reach out and save them, but the man burning the books was full of hate because of the fallen buildings and the people caught inside.

A young man whistled in the street. She had the impression that he was whistling at her. She walked a little faster.

The day she started this job her mother said, ‘Don’t be fooled by their friendliness. It’s only a mask.’

Shirin shouted back, ‘You always see the worst in people! That’s your problem.’

Her mother sighed, shrugged and turned her back. Shirin stood in the tiny kitchen, her hand gripping the edge of the counter. She watched her mother at the sink, washing up in the long shapeless clothes she wore and then she went to the bathroom, splashed her face in cold water, re-applied her lipstick and walked out without saying goodbye.

The man whistled again. A blonde in a tight skirt hollered a reply. Maybe, Shirin thought, maybe I’ll never be fully part of this country. But perhaps I no longer belong anywhere.

The first thing she saw were the people looking up at the blue sky and she heard shouting but the words did not mean anything. Then a crowd of people was running in her direction. A gust of leaves flew up with the crowd. No. Not leaves. Fragments of grey paper, and ash too, clouds of it blotting out the sun and there was a smell of something and she began to run with the people because the dust was in her eyes and mouth; because people were screaming that the building was hit.

She ran home with the panic and the crowds. A man in a suit, his eyelashes grey with the dust, asked if she was all right. There were tears in his eyes.

The man shook his head and moved away and she was swept on, grateful.

When she reached the apartment she did not use the key. She rang the bell. Her mother threw her hands in the air. ‘Why is there dust in your eyes? Why are you home so soon?’

Shirin could not speak. Her mother fetched a cold flannel and gently cleaned her face.

They went back to the old country; she and her mother. It was not as Shirin remembered it.

‘You can’t wear those clothes in the street,’ her mother said.

‘There’s nothing wrong with these.’ Shirin smoothed down her skirt and adjusted her hair in the mirror.

‘If you show your legs like that, they’ll kill you.’

Shirin walked to the door but her mother blocked her path. ‘Please daughter.’ She tore the scarf from her head. ‘At least wear this.’

Shirin took the scarf, blue as the sky, but she saw the grey in her mother’s hair, grey like ash. And she threw the scarf round her neck, where it trailed like a river. ‘Now let me go.’

‘Why must you be so stubborn?’ her mother asked, beginning to weep. ‘Your father would never have allowed this.’

Her mother fell to her knees. ‘I beg you.’

Click, clack down the street in her heels: click-clack to the sound of car horns and the smell of fumes. Click-clack past the new high rise buildings and backdrop of mountains, lost in the smog.

As Shirin walked, the car horns in the city streets receded. She walked and was lost in her American life, lost in Richard and his promises, remembering the slight pause when she first met his parents, the politeness that followed.  She walked and gazed at the ring on her finger, the tiny diamonds glittering in the heat of the street. She walked and did not notice how everything had changed: the sea of black clothes, the head coverings; the sense of something lost.

She opened her mouth but only dust came out.

‘Where is your veil?’

She looked. The man had stones in his eyes.

Casting the shoes aside, she ran. Stars tumbled out of the sky onto a flag. A group of men chanted and burnt the flag and the stars flew back up to where they had come from.

She grabbed at the ash that fell and pulled it over her head.

On the corner by the apartment a man was burning books.  ‘Murderer!’ she cried. The word bounced off the rubble, came back again.

‘It’s me, Shirin. Let me in!’ The buzzer pierced her ears.

The door opened. The men became shadows and ash.

Her mother hugged her tight. ‘We do not belong here any more, Shirin. Perhaps we have indeed become Amerikan.’